This Actus wasn’t in very bad shape overall so I expected that it would be a simple project. It did not run and the glass had some distracting scratches but the dial, hands, case, and movement seemed to be in good shape still. A rattling and metal on metal dragging sound could be heard when the watch was shaken so something was definitely loose inside. While shaking it I noticed that the second hand would start moving occasionally but would immediately stop. Putting it into the winder seemed to do nothing for it so I suspected that the loose piece inside must be the autowinding rotor. 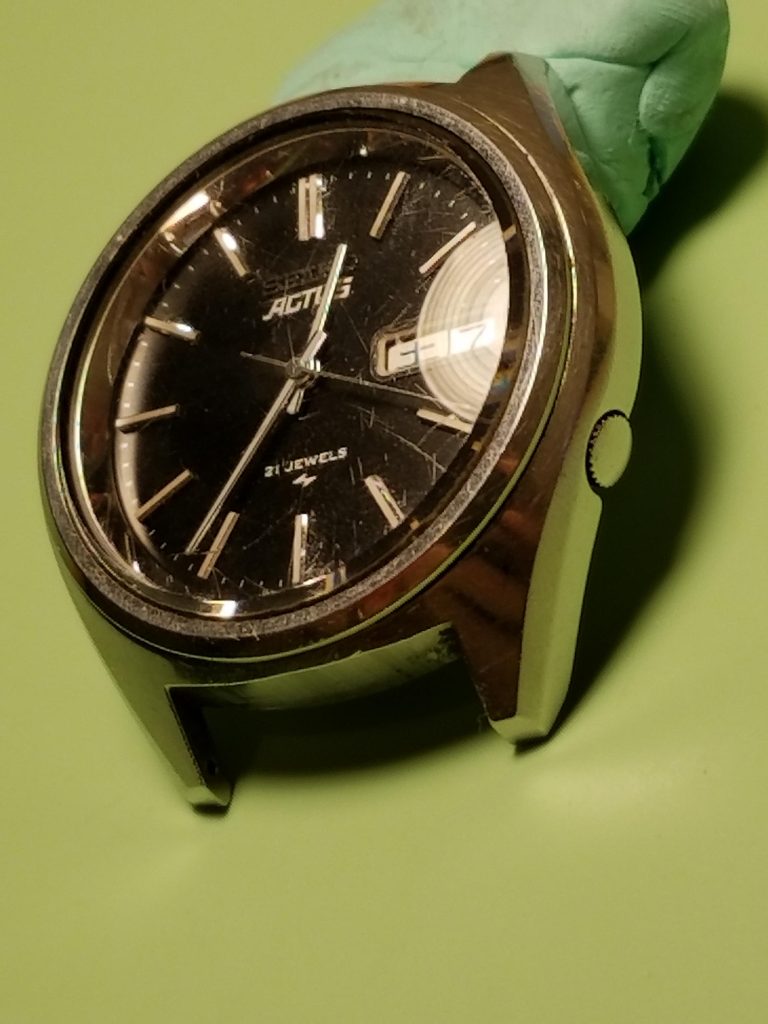 Doesn’t look too bad. Scratches on the glass are distracting so I’ll try to do something about that.

Here are a couple of pictures of the watch opened up. I think they are fairly self explanatory. I confirmed that the rotor was mostly unscrewed from the movement. The gears on the bottom of the rotor most likely were not engaging the rest of the automatic winding system. This was demonstrated in the following pictures with the shake being obvious in the circled area. 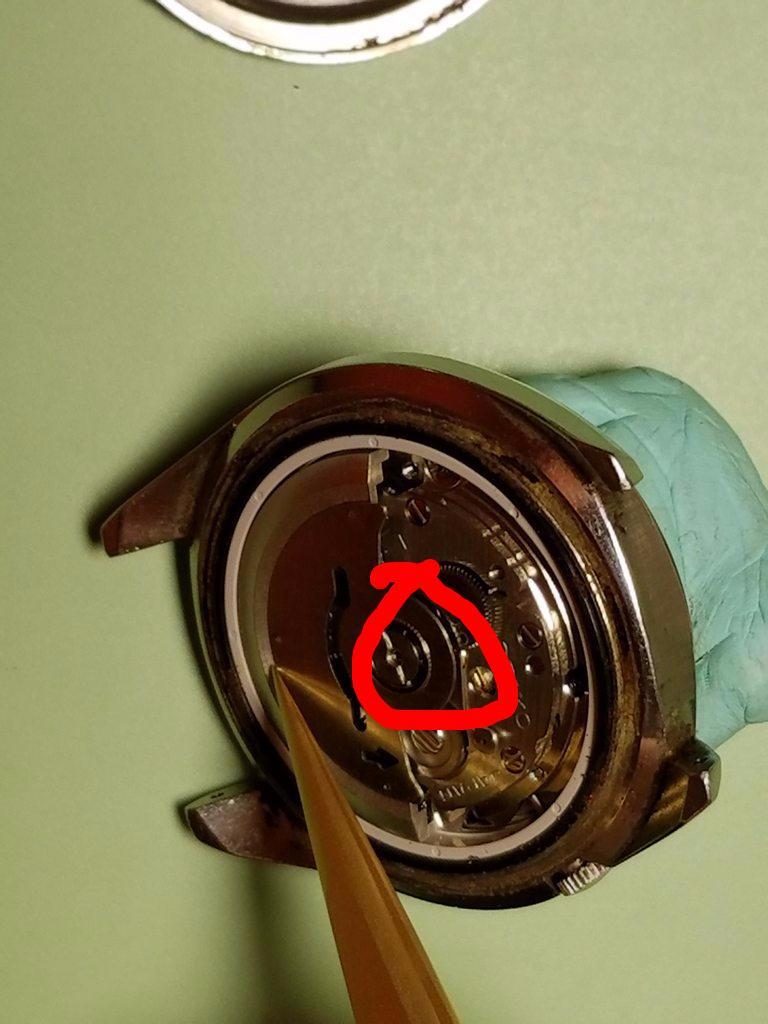 The rotor is almost completely unscrewed. There was a lot of extra movement as shown in the red circled area on these two pictures. 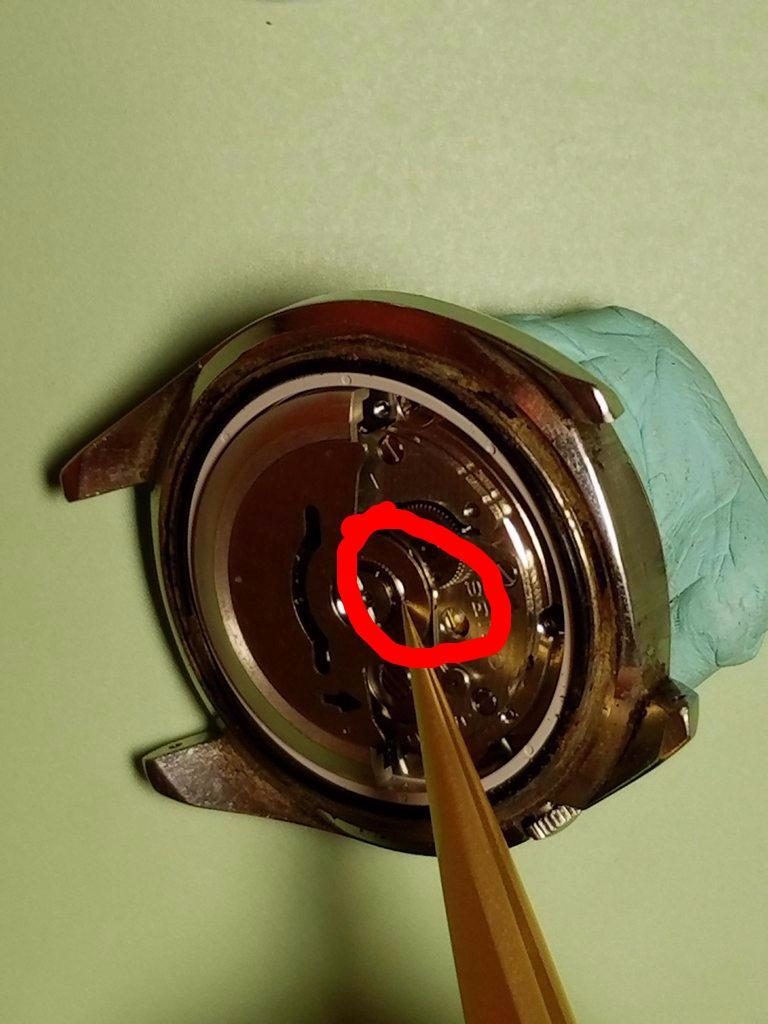 The rotor is almost completely unscrewed. There was a lot of extra movement as shown in the red circled area on these two pictures.

I removed the rotor to identify what the metal on metal dragging sound was. The red arrows point out all of the areas that looked like the rotor was rubbing on. Most of this looks cosmetic except maybe the the gear I pointed out; that turned out to just be old lubricant and filth and it cleaned up nicely. With the rotor removed the damage from it being loose is visible; abrasion all around the movement.

With the weight removed I was able to wind it up fully and it started running. I put it on the timegrapher and it looked surprisingly good aside from the basic symptoms of a dirty movement. This basically confirmed that this would be a simple clean and oil to finish things up. 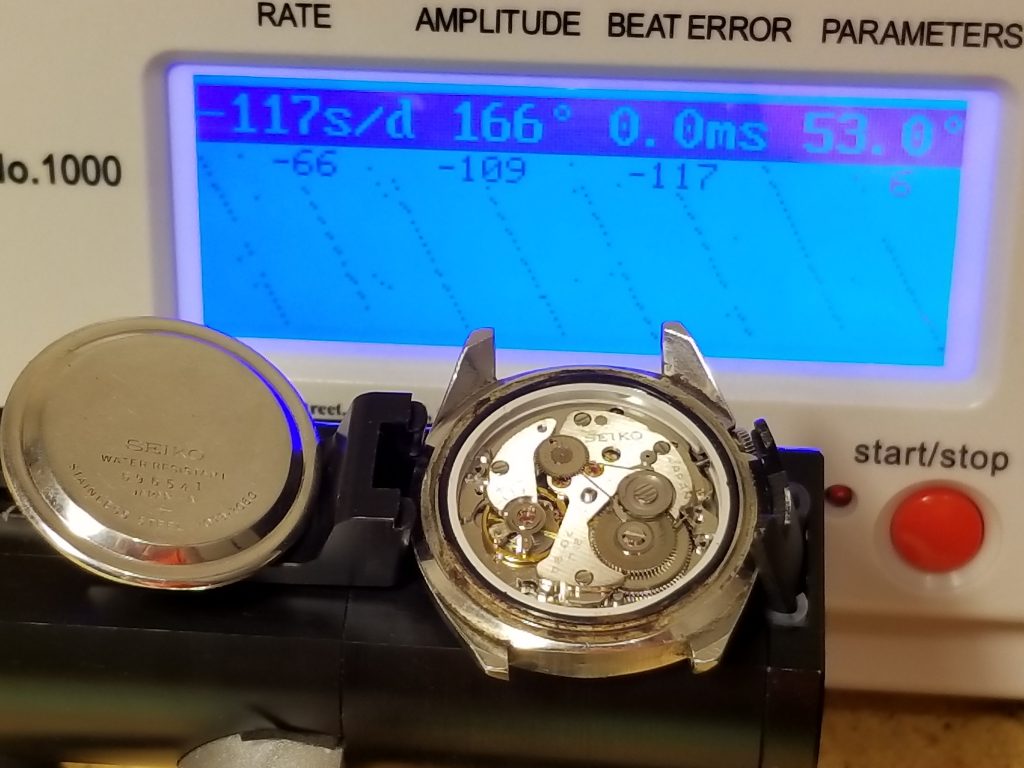 Fully wound on the timegrapher. This looks pretty good aside from the symptoms of needing a good clean and lube.

Here is the mainspring which looks worse than it really is because the grease Seiko uses is a grey/black color. However, it is still gummed up with broken down grease and oil which prevents a lot of power from making it to the train of wheels. This is probably the biggest contributor to the very low amplitude displayed on the timegrapher. Once I got the spring out of the barrel I discovered that it still looked perfect in shape so this will be cleaned up and reused. Mainspring is losing a lot of power gumming through this crap inside. This is just old lubricant which has degraded over the years.

Here is the movement disassembled and getting prepared for cleaning.

Disassembled and getting ready for the ultrasonic cleaner 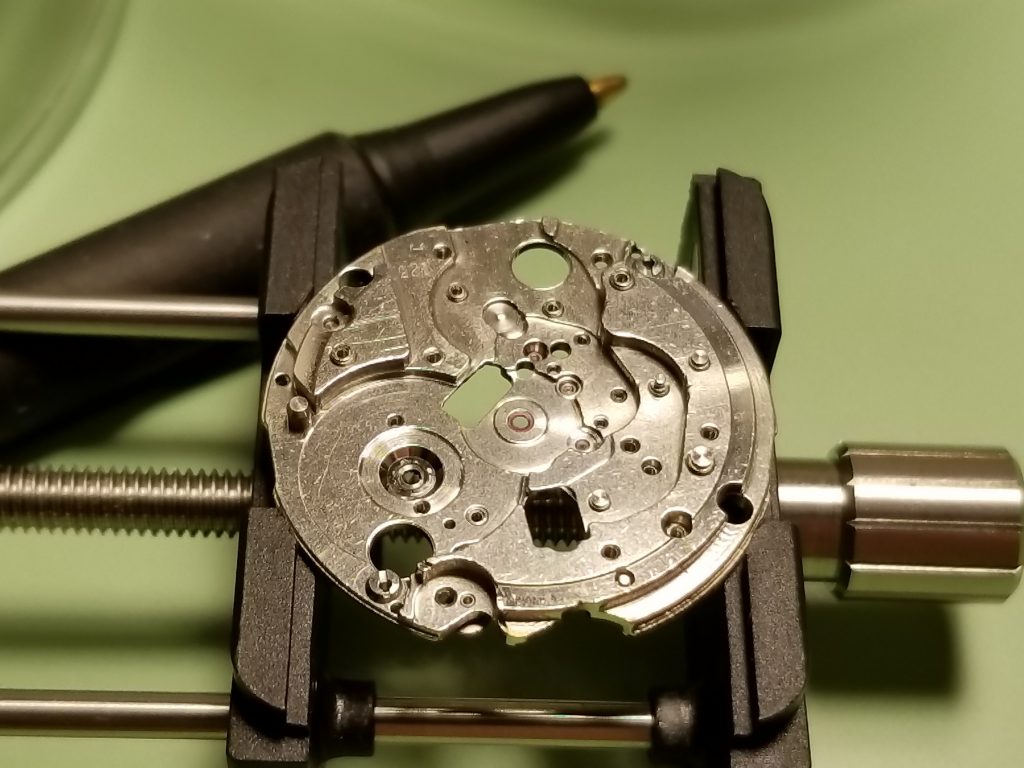 Mainplate stripped down getting ready for the ultrasonic cleaner

Sorry folks, this is about the time that I got carried away and forgot to snap some pictures of this process. Here is the movement reassembled and being adjusted on the timegrapher. Mostly reassembled and being checked on the timegrapher. The trace could probably be smoother but for its age and cost this is good enough for me!

I stripped the case apart and the seals were so filthy that the ultrasonic cleaner and regular solvents weren’t doing the job so I had to figure something else out. I eventually tried some Brasso on a toothpick to slowly clean off the corrosion and filth from the case seals which through a bit of patience did the job. The finish on the case itself looked good enough to me after taking a cycle in the ultrasonic so I didn’t need to touch anything up or use any polish. Finally, I tried to polish the original glass but as usual with hardlex this was useless and I ended up replacing it.

I tried polishing the original glass but it wasn’t happening so a replacement was installed.

Here it is with a strap. I’ve been wearing it daily for about a week and so far is keeping time to about -7 seconds per day. 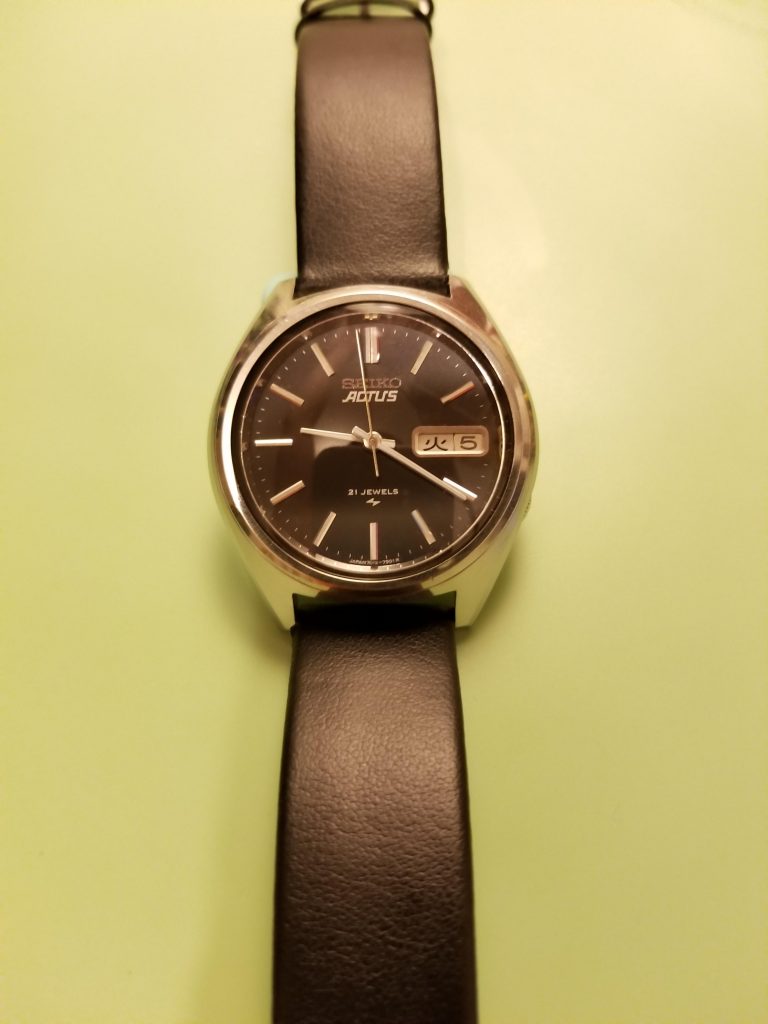 On a strap keeping -7 seconds per day

I think this turned out well and coincidentally gave this watch a nice birthday present. Thanks for looking!