A while back I purchased a 1969 Omega Seamaster 166.032 along with an extra movement for a new project. I wore this watch occasionally for several months and it kept surprisingly good time but the rotor was obviously loose inside so it was time to get to work.

It looked pretty good overall. The crystal was signed, clear, and mostly scratch free. The only notable imperfection was a slight crack on the edge of the attached cyclops; maybe in the glue holding it on. 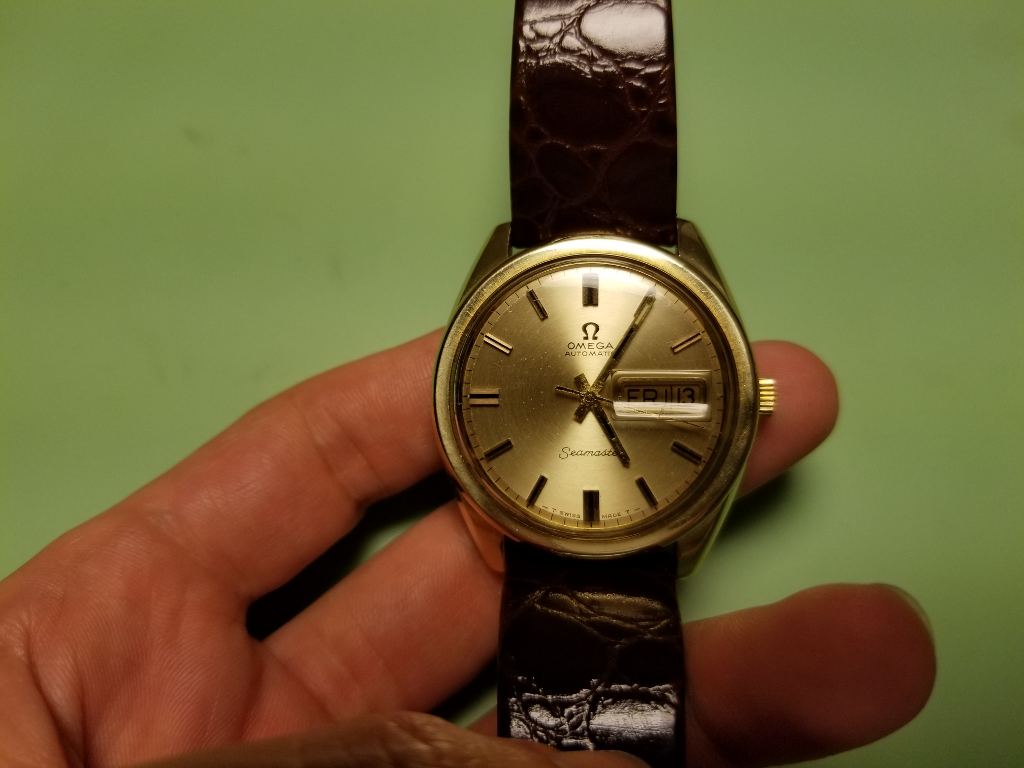 The dial looked great for its age with only a few minor spots that I decided not to touch. Up close the hands appeared to have had some fine sandpaper taken them in the past and the hour hand was slightly bent downward. They looked okay at arms length so I decided to leave them alone. 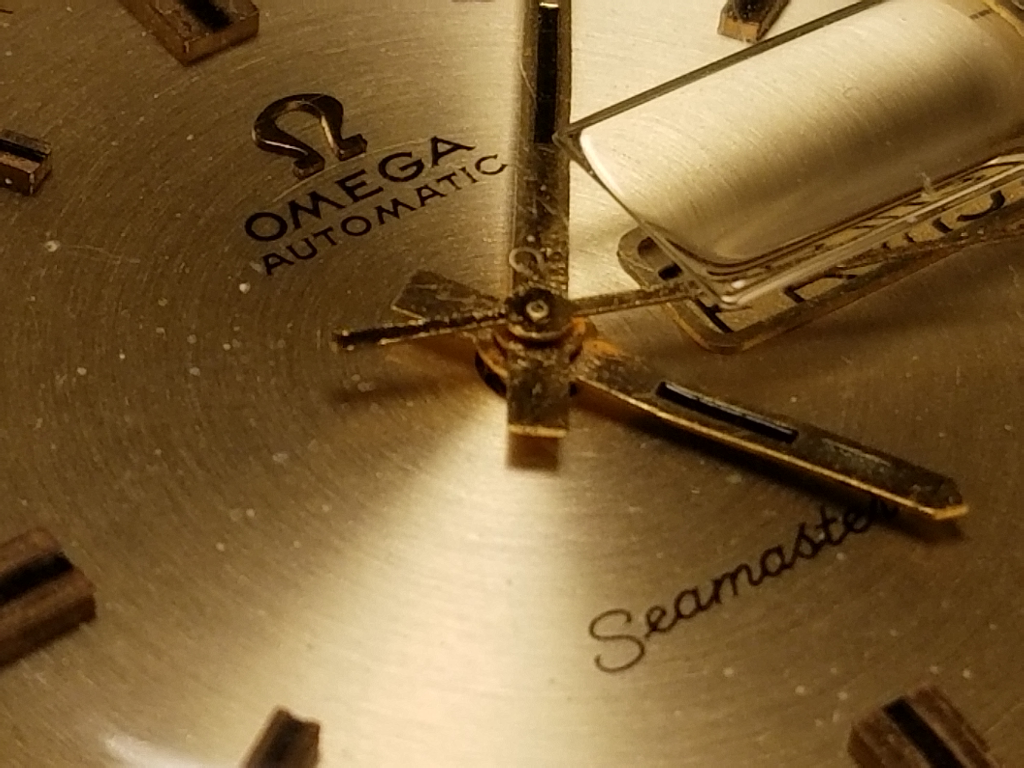 It has the original signed crown and all the plating is intact. No real noteworthy dings, scratches, or tarnish. 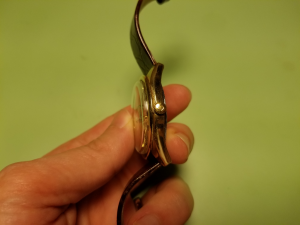 The only real [minor] problem with its outward appearance were the deep scratches in the case-back; not a big deal to me.

The rotor was pretty loose on its axle but luckily hadn’t worn any finish away.

I decided to swap the rotor and axle out and instead reserve this repair for an upcoming blog post. Here is the donor movement to show you what it should look like. With the auto-winding assembly removed I was able to note that the movement was badly scratched up around every visible screw and even some notable screwdriver marks where there aren’t any screws. Surprisingly none of the screws themselves were damaged! Since all of the plates on the spare movement were in better condition and its serial number was close enough to the original to be dated to about the same year, I decided to do a transplant instead. 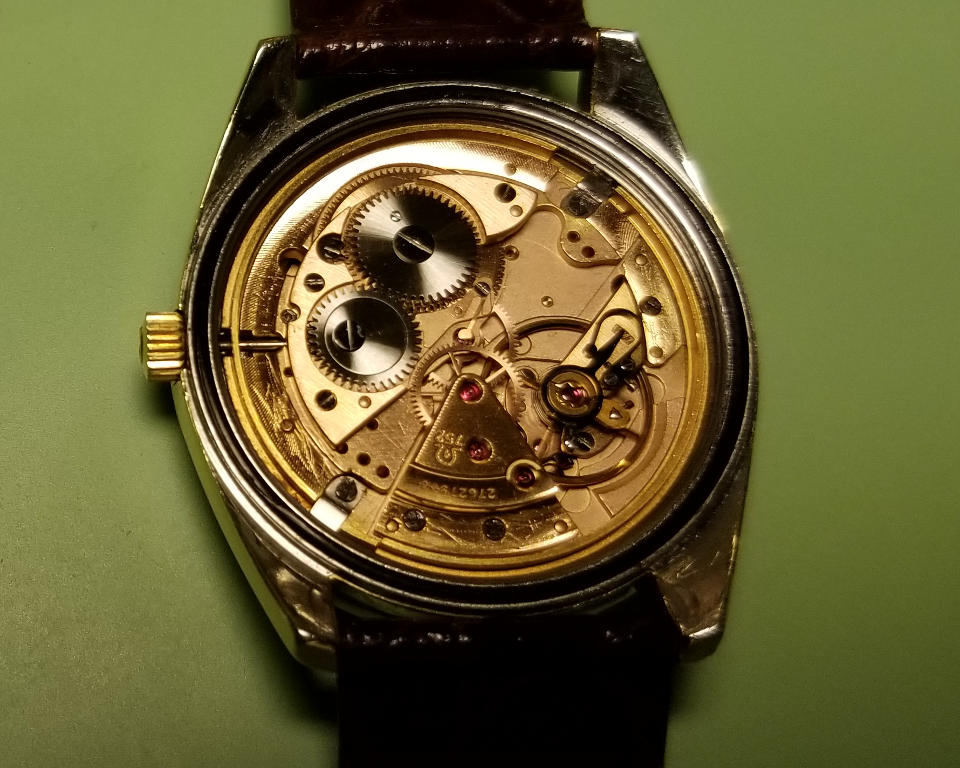 I uncased the movement and salvaged a few parts that the transplant required leaving the remaining work just a straightforward and uninteresting cleaning. The original movement and the worn parts were set aside for a future project.

I serviced the donor movement and swapped over the day and date wheels along with the stem and crown so everything matches. Here is the donor movement getting a final check to make sure it was ready to be cased.  It looked good enough for me!

Here it is cased up with its original movement wearing the silver accessories next to it. 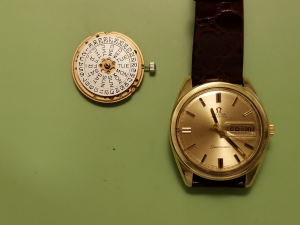 It took me a couple of days to complete its regulation after casing but my most recent measurement gave me a pleasing +3 s/d average rate on the wrist over a week. Overall I was very happy with how this turned out! 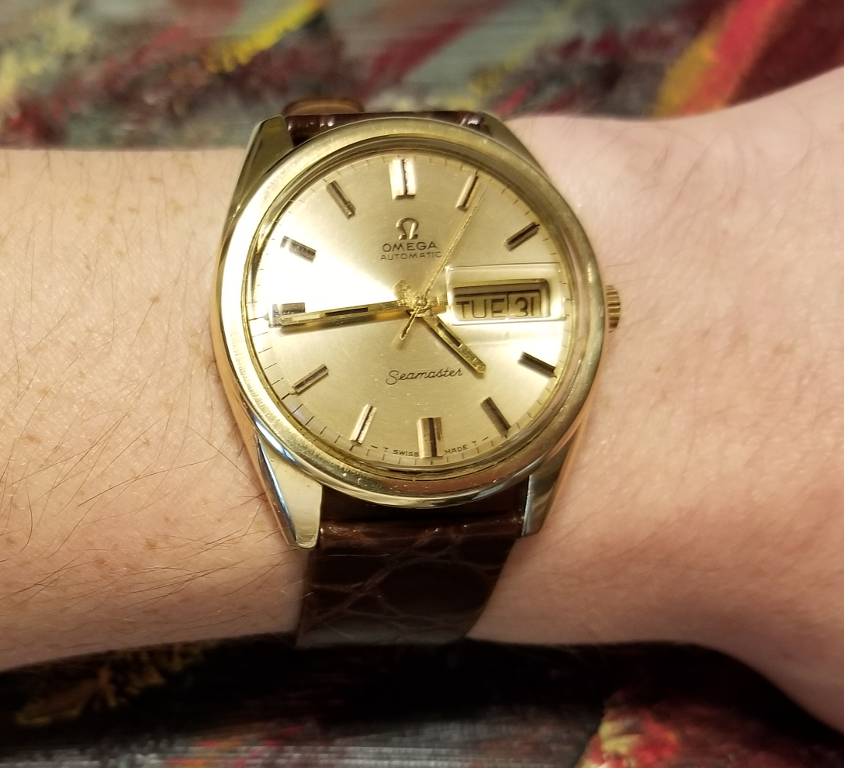 This entry was posted in Projects and tagged Omega, Seamaster. Bookmark the permalink.